This week we have the Reading Triathlon 2017 race review by one of our from Team Trivelo.  Its September and the summer that never was looks to have slipped away as mornings are graced by a chill in the air and the duvet no longer seems quite thick enough.  Perfect settings for a late season triathlon that has been a consistent diary entry for over a decade, the Reading triathlon.  This year under new management as the guys at My Sporting Times have passed on the mantle to the local Reading Tri20 club. 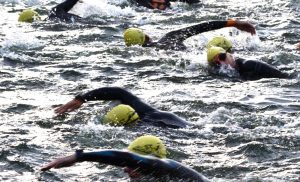 Race morning and the forecast looked to be spot on as the temperature hovered around 12 degrees and the rain didn’t look too far away.  Thankfully no wind so the deep rims can grace the TT bike which is just as well given zero training on anything else.  Registration is on the day and open from 6:30am so an early morning call for 5:30am to get up and shovel some fuel in ahead of the start.  First challenge for Reading is the journey from car park to the event which is a 3/4 mile walk / ride from Green Park to the Reading lakes hotel.  All good unless you were shuffling any littlun spectators along for the effort having already pissed them off by waking them before CBeebies kicks off. 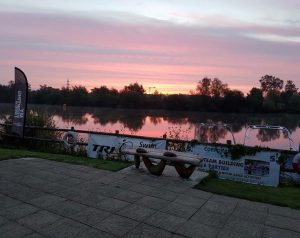 With a relatively modest field of under 500 the event has a bit of a family feel which is probably reinforced by it being run by all the good folk from the Tri20 club who sacrificed their race day to help and marshall.  Transition is in an old car park area and the bike racks are numbered so their is no carnage for fighting for prime placement just find the number and begin the morning ritual of prep for race.  With over an hour to spare my prep went well albeit stalled a few times with the need for some portaloo visits and creep down to race weight.

The swim is around a beautifully kept lake with tree linings on all sides.  No reeds to contend anything in the water as and the water quality is top notch so perfect for any newbies to open water as it removes many of the fears.  One lap for sprint distance and two for those heading for an Olympic distance.  Its a well marked loop with the entry and exit relatively close to one another which means no crazy long runs for T1.  Swim went as well as could be hoped with the calm start to the race and good fortune finding someone to tail out of the start immediately who did me the good favour of allowing me to draft him for both laps.  Result.  A relatively leisurely 27 mins later and exit the water feeling strong although somewhat guilty for had such an easy swim leg. 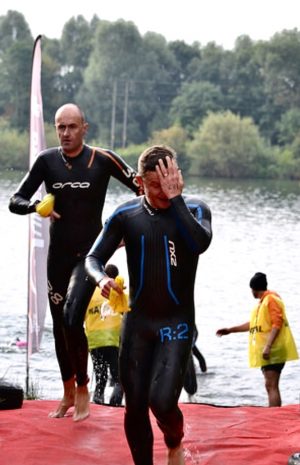 Into transition and still early enough to be quiet and time to prep for the bike.  Wetsuit removed without any trauma and glasses and helmet all where they were left.  Out onto the bike leg in under 2 mins with enough time for a quick drink to cleanse out the last of the lake water.  The bike leg is two loops for Olympic that creeps into Olympic plus territory being 27 miles.  The course is mainly open road with a couple of miles only close from the general public for the race.  A relatively quick course with not much in the way of hills allows you to get down into the aero position and crank it out.  The road surfaces are generally good but there are a couple of winding descents on some of Berkshires less than finest back roads where you need to hold your line and stay safe.  Two right handers on the course with one a mandatory foot down so a chance to test your clip out and in mid-flight.  No drafting and marshalls throughout to help you with the course and keep everyone honest.  Bike leg went well until my nutrition plan went out the window as my bike bag behind the stem flipped round and there was a jelly baby massacre as they tumbled through my back wheels.  6 miles in and the nutrition plan would now be pacing my fluid intake only.  Thankfully in the bottle I had an Elivar mix combined with two gels spicing up my cocktail.  Trundling back into T2 with an average speed of over 20mph and no mechanicals other than a jelly baby incident all looking good for the run. 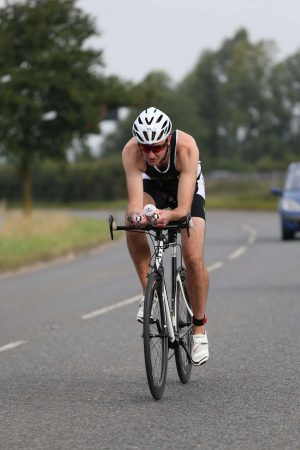 Coming through T2 in under a minute so issues and the chance for a few jelly babies and to grab a couple of gels to top back up for the final push.  The run is 6 laps of the lake so plenty of chances for spectators to spot you and say hello as you grind out the last leg.  Again the distance is up on standard 10k with an 11k run to complete your day.  Its cross country and flat but as the rain starts to fall it can get a bit slippy.  It is also a bit narrow in parts so be ready for the odd bump and trip as you work your way round.  Pushing through the first mile of jelly legs I realised that the run was going to be a less than pretty affair and that PB might not be on the cards.  Having had such a good swim I may have over cooked it on the bike so left little in the tank for the final hour.  With spectators to cheer you on and the first real sight of plenty of competitors there is no place to hide if you fancied a walk so only options are to push on and get to the finish presenting your finest game face for the camera when it appears.  A run of 54 minutes isn’t going to be troubling Gomez but it will do and gives a top 1/4 finish with plenty more to do for that elusive podium result. 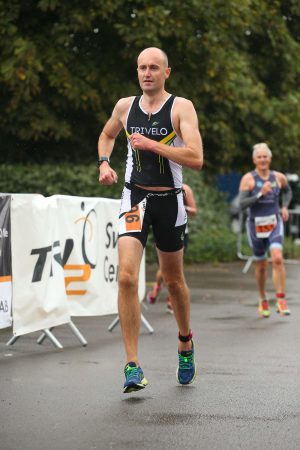 With another shiny medal for the collection and a stylish finishers shirt we thank you Reading and we will be back next year with Team Trivelo aiming for that podium!